skip to main | skip to sidebar


Anna Hazare was inspired by Swami Vivekananda, a revolutionary saint of India, who told that the ultimate motive of human life should be service to humanity. Swami Vivekananda became instrumental for awakening Indian youth in the late nineteenth and early twentieth century. Striving for the betterment of common people is equivalent to offering a prayer to the God, according to Swami Vivekanand.

He realized the truth even at his early age and decided to devote his life for the service of mankind. Since then he has been serving tirelessly for the betterment of Indian people.

Anna Hazare sat ten times for "Anashana" (Fast), a Gandhian tool for movements against governments, and got success every time.

Anna Hazare was born and brought up in an ordinary Maharastrian family in India and started his career as a soldier in Indian army. He joined Indian army when many Indian soldiers became martyrs in the Indo-China War (1962) and the Government of India appealed young Indians to join the Indian army. Being patriotic, he promptly responded to the appeal and joined the Army in 1963. He was posted to several states in India e.g. Jammu & Kashmir, Assam, Mizoram, Sikkim, Bhutan, Leh and Ladakh and braved challenging weathers during his fifteen year tenure as a soldier.
Anna Hazare was posted at Khemkaran border (Rajasthan) as a soldier in Indian Army when Pakistan attacked India in 1965. He was brave enough and fought teeth and nail with the enemies. A bullet had passed by his head and Anna Hazare had a close save. All of his colleagues died in that attack. Hazare believes that this was the turning point of his life as it meant he had a purpose to life. It was at that particular moment that Hazare took an oath to dedicate his life in the service of humanity. He was only twenty six at that time yet pledged to be a bachelor!! It shows his sacrifice and will power. He has the same kind of will power even today.
He admitted that he had passion for marriage at the young age and had several proposals for marriage. However, dedication to service of humankind inspired him to be a bachelor.
In order to be self-sufficient and to be eligible for the pension scheme of the army he continued in the army for 12 more years. He, then, opted for voluntary retirement and returned to his native place in Ralegan Siddhi.
Four decades long journey of Anna Hazare from a soldier in Indian army to a social reformer is unprecedented. He is a non-violent yet effective campaigner. He followed Gandhian path. Now the whole world know that he is a true Gandhian.
He became instrumental to resurrect a barren village, Ralegan Siddhi into an ideal village that became model for many others. He is also a Right to Information crusader. He has empowered faceless citizen of India through his pioneering work on Right to Information (RTI). Everybody knows that RTI act has become a very effective tool against corruption in government machinery in India.
His efforts to empower village Panchayats and his fight against red taping in government offices have also been appreciated widely.
Mahatma Gandhi said, “The society needs such volunteers who are ready to get buried in selfless service for the better future of the society.’’

Anna is such a selfless volunteer and a true Gandhian. Anna has become renowned globally these days for his "Anashana" in support of Janlokpal bill. Three cheers to him.

Anna is all set for sustainable development. He has been advocating for the same since very long time. Hazare is a true environmentalist. He advocates for proper planning of natural and human resources instead of exploiting those. Unlimited exploitation of earthen resources likes of water, coal, petrol, diesel and kerosene is not at all advisable according to Hazare. This can not be termed as perennial development because it will be going to lead to destruction in future days. These sources of energy are limited and hence he is concerned about the future of next generations. In this way, Anna Hazare is also an environmentalist. Anna opines for sustainable development.

Anna Hazare used to see miserable condition of farmers due to water scarcity in Ralegan Siddhi. The village falls in the drought-prone area of Maharashtra state with only 15 to 20 inches of annual rainfall. There were no weirs to retain rainwater. As there were no system for water conservation scarcity of water had been prevailing for ever before Anna intervened.
Water tankers were the only source of drinking water for the villagers during hot summers. Food grains were scarce and the villagers of Ralegan Siddhi used to walk out in search of employment. Some of them had also opted to open country liquor dens as a source of income that defamed Ralegan Siddhi and marred the social peace of the village. Villagers were also involved in thefts and physical brawls resulted in loss of morality.

Inspired by the work of Vilasrao Salunke, a resident of Saswad near Pune, Anna  Hazare had started a project of water management through watershed development at Ralegan Siddhi. He steered the villagers of Ralegan Siddhi to begin water conservation project by preserving every single drop of water. They also worked for preventing erosion of the fertile soil. They built contour trenches as well as staggered trenches and gully plugs. They also became instrumental for forestation of more than thousand acres of land. They constructed five RCC weirs and sixteen Gabion Weirs after that. All these efforts resulted increase in the ground water level of the village.
Anna Hazare and his team worked out the cropping pattern suitable to the soil quality and water availability. Team Anna applied scientific methods and technology for agriculture. This led to fivefold increase in the cultivated land. As a natural consequence, the villagers became self-sufficient in food. The village started importing labors from neighboring villages. All these efforts of team Anna changed economic condition of the village. Ralegan Siddhi has taken the path to be an ideal village.

The changes in the economics united all the villagers. The Villagers voluntarily contributed to build school, hostel, temple and other buildings of public utility.The villagers established grains bank and dairy projects. These further developed team spirit and standard of life in the village. Level of education also increased viz a viz to economic condition.
Moreover, Co-operative society and self-help groups for women and youth helped develop Ralegan Siddhi in every aspect of life and provided a new glittering face to it. Ralegan Siddhi became the first role model of an ideal village in India. It has become an example of turning from worst village to an ideal village. Four students, so far, have been awarded Ph. D. degree on thesis on Ralegan Siddhi.
Anna Hazare and team Anna did the miracle

I had been busy for quite a long time as I have been elected Secretary, Sri Jain Swetambar Khartar Gachchh Sangh, Jaipur. I have tremendous workload in this new venture and was unable to write much in the internet.

I am thinking to come back again as much as possible to interact with you.
By the time, my son Darshan Kothari has started his IT business by name Vardhaman Infotech. He is young enough to work hard. He is presently in Website designing and development and Software development.

There is an ill publicity since few days about Malpura Dadabadi.Some people are doing propaganda that the original "Charan" is removed from its place. It is far beyond the fact  The original "Charan". is well in its place and nothing happened to it.

There was "Vilepan" (Coating pearls) over the Charan. This is a well recognized process in Jain traditions to protect old statues, idols etc.However, some people were not happy with this Vilepan. Looking in to people perception the "Vilepan" has been removed and the Charan has regained its old status.

You can see Hindi version and photos taken after removal of Vilepan beneath. 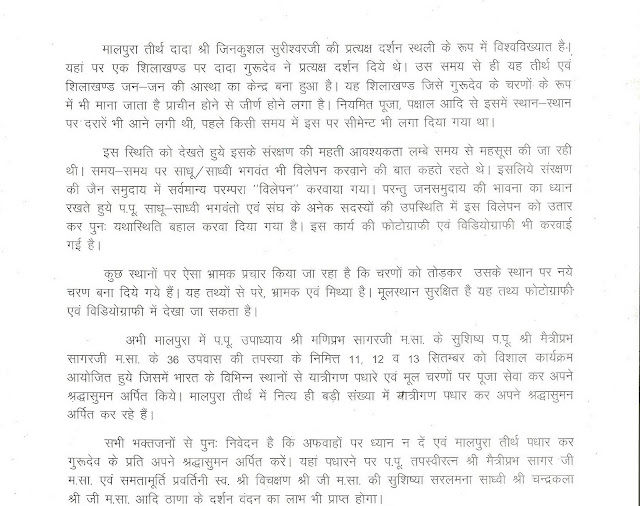 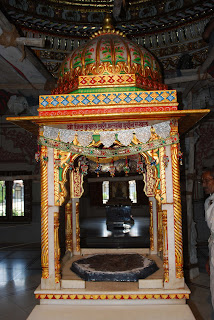 This fair will be organized in the auspices of Jain monks and nuns staying in Jaipur. Jain saints will start from Vichakshan Bhawan, Johari Bazar. Jaipur early in the morning along with laymen. There will be Snatra Puja at  Sri Chandaprabhu Jain temple, Amber followed by a breakfast in Dadabadi campus (situated opposite to the temple). .

The main attraction of this Mela (fair) is Nandishwar Dweep Pujan.  There is an old wooden model of Nandishwar Dwip that will be brought out for Puja and public viewing on the day as usual. Puja will be followed by Sadharmi Vatsalya for all sects of Swetambar Jain community.

It is worth noted that Pt. Shivachandra Gani composed Nandishwar Dweep Pujan some two centuries back on the day of Jirnoddhar of this temple. This Puja is being organized every year since then.

It is worth noted that PP Maitriprabh Sagar ji is staying at Malpura Dadabadi to observe his Chaturmas this year.

Darshan Kothari, Proprietor, Vardhaman Infotech has passed his 1st year BCA from prestigious Maharaja College, Jaipur. He is placed in the top position in his class for the year 2010-11..

Though very young, he has crossed many milestones in his career. He is well trained and well versed in IT field. He is sincere and dynamic.He has Quality orientation and Professional attitude.

Congratulations!!!
We wish all success in his career.

I have been looking forward to extend our works of Friends of tribal Society since many months. I have got an opportunity for the same while contacting students of  Azim Premji University, Bangalore, a prestigious institute in the world.I have received an email from one of the students which is reproduced here.

Dear Mr.Kothari,
I am Gopika Nangia, a student of Masters in Development from Azim Premji University, Bangalore.
A   s part of our first semester, we need to organize a group week-long field exposure trip to an organisation/place of our choice, so we were wondering if it would be possible for us to visit your organisation, Ekal Vidyalya in Rajasthan. In addition to that, we need to make arrangements to stay with locals, so we were wondering if they would be open to having us over, and if so,whether it would be possible for you to assist us in arranging that.
Our group comprises about fourteen people(including one professor) and the tentative dates are Oct 1st-10th.
Please let us know as soon as possible if this trip is feasible, because we have to book tickets etc.
Thank you!
Gopika Nangia

Jyoti
Jyoti Kothari is proprietor, Vardhaman Gems, a leading Gem and Jewelry manufacturers and traders having Head office in Jaipur and operating in Hyderabad, Kolkata and Mumbai. Vardhaman Gems (http://vardhamangems.com) have global client base. Business and franchisee inquiries solicited. He is senior adviser to Vardhaman Infotech (www.vardhamaninfotech.com/), a mobile applications and eCommerce website development firm in Jaipur. Jyoti Kothari is also a Quality Management System (ISO 9000) Trainer, Consultant and Lead Auditor. He is Educationist, writer, Social worker and Philanthropist.